Growth of Renewable Energy in India 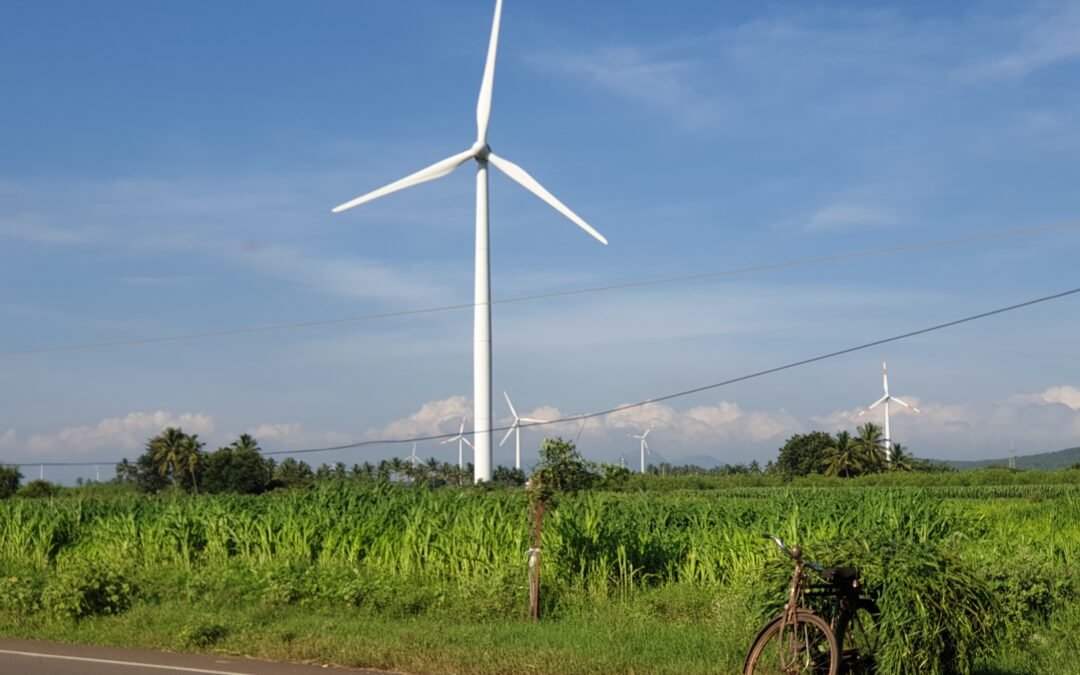 The world is heavily dependent on fossil fuels for energy production. Energy production plays a crucial role in human existence and development of infrastructure. Further, energy production contributes to economic growth. With the rising standard of living and income, India is the third largest energy consuming nation. In India, the main source of deriving energy are fossil fuels. As per India Energy Outlook 2021, the energy consumption hasdoubled since 2000. Even though energy consumption has increased exponentially, the demand is still being met by fossil fuels like coal, oil and solid biomass. Since India is a developing country, the demand for energy will continuously rise with growth and development. As the growth in population of the country is sky rocketing, the energy requirement would also shoot up. Our country is adding a city as big as Los Angeles to its urban populationevery year. An alarming aspect that needs to be considered is that fossil fuels are non-renewable and limited sources of energy. Fossil fuels being finite sources would exhaust in less than ten decades, considering the rising energy needs. Apart from the rising energy demand and fossil fuel depletion, one of the driving factors that is pushing for shift to alternate sources of energy is the adverse effect fossil fuels have on theenvironment. Over the years, fossil fuels have adversely affected the environment and subsequently human life. From carbon dioxide and other greenhouse gases emissions leading to global warming and climate change, air pollution to loss of wildlife and habitat, fossil fuels have an extremely harmful impact. Thus, energy security and certainty along with reduction in environmental pollution and damage is leading toglobal adoption of renewable sources of energy.

Renewable energy, also known as clean energy, is derived from natural resources that replenish themselves. In simple words, it is a process by which energy is harnessed from nature. Some of the most common sources of renewable energy are solar energy, wind energy, hydropower energy and geothermal energy. After investment and funds, the next most important aspect for growth and development of the economy is energy. Renewable sources of energy are not only replenishable but come with a variety of benefits like reduction in carbon emissions and clean air. With the depletion of fossil fuels and increasing demand for energy, India urgently needs to build a path towards maximum utilization of renewable sources of energy.

The urgency of renewable energy production is two planked. Firstly, the most pivotal theme that leads to the urgency is the global response to climate change and harmful effects to the environment caused by combustion of fossil fuels for energy production. There is widespread awareness of human activities that contribute towards global warming subsequently paving the path towards climate change. It has been globally recognized that activities harmfully impacting the environment and causing climate change must be reduced if not halted. There are several international and national treaties and policies to ensure control of climate change and environmental conservation. A swift shift from conventional energy production to renewable sources of energy present in abundance is one of the steps. Secondly, another factor is the population explosion that is causing an upsurge in energy requirements. India is still in its developing stage, with the expanding economy along with urbanization and industrialization, there will be rapid growth in infrastructure. Along with the needs of the population, the energy needs for such development would also rise. As mentioned above, fossil fuels are limited and scarce in nature. To ensure energy conservation, efficiency and security, the need of the hour is to adopt renewable sources of energy.

Our country is endowed with a variety of renewable sources of energy like solar, wind, geothermal, biomass and small hydropower.  The government of our country was the first to set up an exclusive ministry for renewable energy and its sources called the Ministry of New and Renewable Energy (MNRE) which initiates and supports energy production through renewable resources. Renewable energy sector is one of the key sectors in India as it is not only aiding the energy needs of the expansive population and sustainable developing but also contributing towards the economic growth of the country. The government along with other dedicated agencies has taken various initiatives and steps towards inculcating and promoting renewable energy into the energy system of the country. At present, India ranks 3rd in renewable energy attractive index in 2021. In the last 7.5 years, the installed renewable energy capacity of India has increased bywhopping 286%. India has the 4th largest installed capacity of renewable energy in the world which was 151.4 GW (“Giga Watts”) as of 31st December 2021. Moreover, India holds the 4th rank in largest installed capacity of wind power i.e., 40.08 GW and 5th rank inlargest installed capacity of solar power in the world i.e., 49.34 GW. The Government of India along with several agencies and private participants are laying down the foundation to make India one of the major clean energy producers. An ambitious target has been set to achieve a capacity of 175 GW of renewable energy in our country by the end of 2022 and further to achieve 500 GWby the end of 2030.

Over the past few years, the government of India has taken several steps to ensure holistic development of the renewable energy sector and has also introduced initiatives and set targets under separate renewable energy sectors. Solar energy is a form of clean energy with no harmful effects. India is blessed with a great solar energy potential as more than 250 days are sunny. With respect to solar energy, our country is advantageous as it receives around5000 trillion KWh per year of solar energy. The amount received is way more than the energy consumption. The government has introduced solar power parks. In 2015, our Prime Minister along with the Prime minister of France introduced the International Solar Alliance wherein solar rich countries come together to develop solar power amongst the member nations. Their aim is to raise one trillion dollars of investment by the end of 2030. An area of the Thar Desert has been demarcated and set aside for solar power projects. The airport in Kochi, Kerala and theGuwahati railway station in Assam are 100% solar powered. Custom and excise duty benefits are being provided to the solar rooftop sector. With technological advancements in turbine technologies, there has been a significant increase in the energy produced by wind driven turbines. The Ministry launched a new wind-solar hybrid policy in May 2018, where the same land would have windmills as well as solar panels. Similarly, steps are being taken to harness the maximum energy potential from biomass energy sources and hydropower sources. Installation of biogas plants was also carried out. To facilitate the growth of hydropower energy in the country, a new hydropower policy for 2018-2028 has been drafted. These are a few examples which showcase that the government is moving towards a cleaner energy system.

At the 26th Conference of Parties (CoP26) held in Glasgow in November 2021, our Prime Minister, Mr. Narendra Modi announced an ambitious target to achievenet zero emissions by 2070. A strategy named ‘Panchamrita’ would be adopted to achieve the target. Panchamrita is a fivefold strategy with thefollowing five aims:

The targets from a. to d., as mentioned above are steppingstones to attain net zero emissions by 2070.  These targets might come across as intimidating and far-fetched, but India is already on a path of making such commitments a reality. It is remarkable to note that India has overachieved the target declared at CoP 21 in Paris by meeting 40% of its energy capacity fromnon-fossil fuels. The target has been accomplished nine years ahead of its commitment. Even though, we are actively moving towards clean energy sources, there are certain challenges and obstacles that fall in the path of deriving renewable energy. The installation cost of technology to harness renewable energy is very high. The government has put in place several policies and measures to overcome these challenges.

In the Union Budget 2022-2023, the Finance Minister, Ms. Nirmala Sitharaman, provided for additionalallocation of Rs. 19,500 Crores for production-linked incentive (PLI) scheme for solar cells and modules manufacturing. This would lead to a rise from existing Rs. 4500 Crores to Rs. 24,000 Crores under the PLI scheme for solar equipment. She proposed provision of green bonds for investment in clean energy infrastructure. She also proposed co firing of 5%-7% biomass pellets in thermal power plants, this would lead to CO2 savings of around38 million metric tonnes per year.

As per estimation, the country requires an annual investment of 250 billion dollars or around 35 billion dollars per year between 2023 to 2030 to reach its target of 500 GW. However, the current funding towards clean energy is only 14 billion dollars per year. Solar and wind energy are the prominent sources of renewable energy which have gained access to investments, but other renewable sources of energy haven’t been able to gain the required funds for promotion and development. The government is not only incentivizing private participants for investment in the renewable energy sector but also encouraging foreign direct investments into the sector. Various policies, programs and liberal environment have been designed to allure foreign investors to invest in the renewable energy sector and ensure rapid growth of the sector. The government has recognized that investment in the sector would result in renewable energy growth targets being met which is directly proportional to the economic growth and development of the country. Expansion of the renewable energy sector leads to increased employment opportunities that further add to theGDP and economic growth. As per the International Renewable Energy Agency, the renewable energy sector created around7,19,000 jobs in 2018. The shift towards and expansion of the renewable energy sector would result in generation of more employment opportunities. The shift from conventional sources of energy to clean energy sources has affected the livelihood of various workers, especially the unskilled and rural population employed in coal and oil mines. The job creation would augment the economic growth of the country as employment opportunities for the unskilled and semi-skilled workers would rise. The meaning of economic growth is seldom restricted to GDP and financial growth of the country. The benefits gained from renewable energy can go beyond the conventional measurements of economic development. Mainly, the process of harnessing energy from various renewable sources takes place in rural areas. These areas along with receiving the energy produced would also witness their upliftment.

Renewable energy plays a critical role in sustainable development. A shift towards renewable sources of energy from conventional ones has been observed globally to secure a better standard of living. Reduction in dependence on fossil fuels for energy production has resulted in lower carbon emission and other greenhouse gases. This helps in control and prevention of climate change. This shift ensures energy conservation, protection of the environment and energy efficiency. The Indian government has takenmultiple steps over the years to increase energy production from renewable sources. It must be highlighted that India has made international alliances and represented itself on international platforms committing to further increase in renewable energy production. Economic benefits are also enjoyed with adoption of renewable energy as it results in an increase in the GDP of the country. India has a vast variety of renewable sources of energy, with the policies and measures introduced by the government, we can bridge the gap between the demand and supply of energy and rather ensure production of only clean energy. India’s global adoption and movement from conventional or traditional sources of energy to renewable energy is gainful for the present generation as well as the future generations.