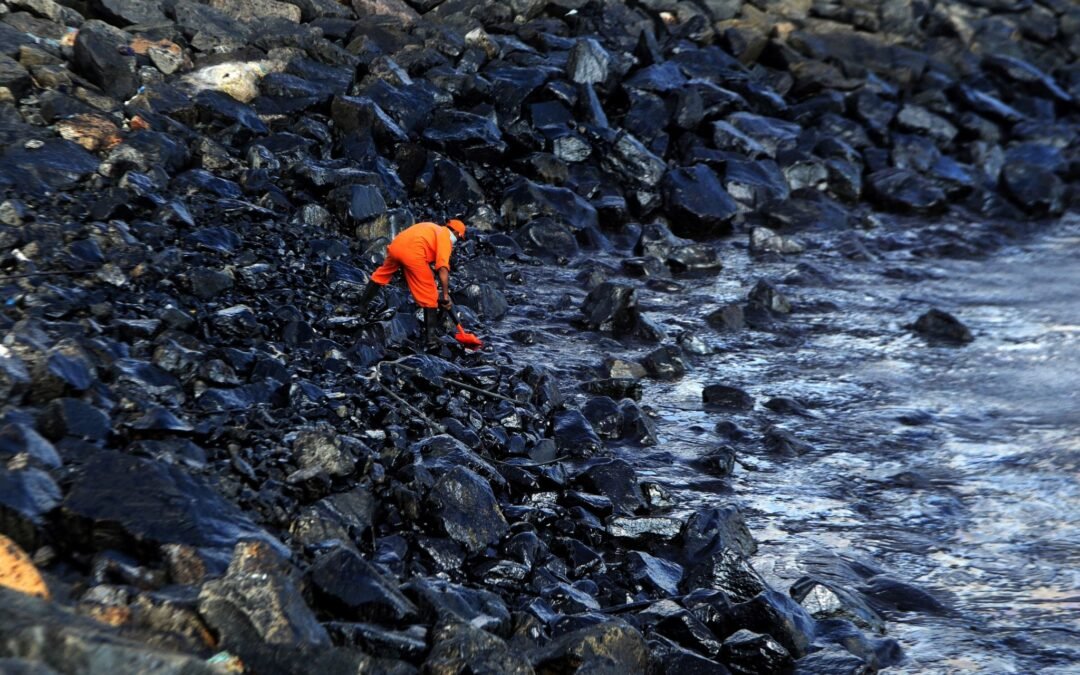 India is lined by two key global oil transport checkpoints i.e., the Strait of Hormuz and the Strait of Malacca, which lies off its west and east coast respectively. India is a major importer of crude oil and remains highly susceptible to the risks of an oil spill. The National Oil Spill Disaster Contingency Plan (“NOS-DCP”) acknowledges and quantifies this grave risk: “about 70% of the world oil demand is ferried along the Indian coastline” and major Indian ports handle over 7,000 petroleum oil and lubricant tankers each year. Typically, oil spills occur on account of either accidents or operational discharges. In June 2021, the Indian Coast Guard, the central coordinating agency for oil spills in India, was placed on alert when a Portuguese flag container spilled fuel oil along the coast of Chennai. This article discusses where the liability of an Oil Spill lies and how’s it’s determined.

India is lined by two key global oil transport checkpoints i.e., the Strait of Hormuz and the Strait of Malacca, which lies off its west and east coast respectively. [1] India is a major importer of crude oil and remains highly susceptible to the risks of an oil spill. [2] The NOS-DCP acknowledges and quantifies this grave risk: “about 70% of the world oil demand is ferried along the Indian coastline” and major Indian ports handle over 7,000 petroleum oil and lubricant tankers each year [3]. Typically, oil spills occur on account of either accidents or operational discharges. In June 2021, the Indian Coast Guard, the central coordinating agency for oil spills in India, was placed on alert when a Portuguese flag container spilled fuel oil along the coast of Chennai. [4] Further, in January 2017, an oil spill outside Kamarajar Port off the coast of Chennai has been termed to be “one of India’s worst ecological disasters ever and a stain on India’s maritime dossier that will be hard to expunge” [5]. Recent oil-spills and their (mis) handling raise serious questions of India’s existing regulatory framework and preparedness to deal with unforeseen eventualities.

The present blog aims to analyse the existing framework in relation to the oil spill liabilities and responses under Indian law. Further, it also focuses on the fundamental challenges of fragmentation regarding oil spill preparedness, liability arising out of it, weak oversight and sets out suggested conceptual corrective measures to curb incidents of such nature.

Part XB of the Merchant Shipping Act lays down the provisions around civil liability for oil pollution damage. Typically, the owner of a ship is liable for pollution damage caused by oil “which has escaped or been discharged from the ship as a result of the incident”. [9] Part XB of the Merchant Shipping Act is applicable to Indian commercial ships as well as foreign ships at Indian ports.

The Indian Coast Guard is the central coordinating agency for dealing with oil spills at sea [10]. Section 14 of the Coast Guard Act 1978 vests the Indian Coast Guard with the duties to protect the maritime environment and requires “taking such measures as are necessary to preserve and protect the maritime environment and to prevent and control marine pollution”. The NOS-DCP has been put in place to deal with oil spills and such a plan has been updated to incorporate the best international practices and technical know-how. [11] An erstwhile NOS DCP was in place since July 1996 and brings together the various stakeholders such as the Indian Coast Guard, the state government and its agencies including emergency services and the shipping, ports and oil industries. Akin to the US Oil Pollution Act, the prevention of oil spill is based on two key preventive measures, first being the contingency plan and followed by the maintenance of Tier-I pollution response capability by major ports. The NOS-DCP also seeks to integrate over a dozen entities including the Indian Navy, Ministry of Shipping, National Disaster Management Authority etc. as resource agencies for an efficient response to major oil spills, and also lays down the detailed functions of the respective agencies and state departments. Apart from the NOS-DCP, an Online Oil Spill Advisory System has been developed by the Indian National Centre for Ocean Information Services and has placed India amongst an elite group of countries who have developed an indigenous model for the prediction of the movement of oil. [12] [13]

Despite this, the Indian regulatory framework governing oil spill liability is woefully fragmented. There is no unified framework to deal with the consequences of an oil spill, further the response to such an oil spill is not adequately outlined along with the state instrumentalities specifically responsible for actions. The multitude of state and state instrumentalities involved and absence of a single window response system considerably delay the response time and allows concerned authorities to shift responsibility. For instance, the NOS-DCP itself lacks any specific statutory basis. This was clearly acknowledged at the 20th NOS-DCP preparedness meeting:

The Officer-in-Charge, Pollution Response Team (East) opined that there are too many regulations and multiple authorities for environment protection. There is a need to properly regulate the entire gamut of activities related to oil pollution preparedness and response. There also exists a longstanding need for the National Oil Spill Disaster Contingency Plan to have the backing of law so as to enable its enforcement. Hence, an umbrella legislation covering all aspects should be enacted.” [14]

The Parliament Standing Committee on Transport, Tourism and Culture in its 224th report on the ‘The Merchant Shipping (Amendment) Bill, 2015’ has conceded the “ample chances” of oil spillage that can arise at the time of cargo loading/unloading. It also refers to the absence of equipment at ports for handling such a crisis. The Standing Committee noted that:

“The Committee recommends that the latest modern equipment being used at International level may be provided to the Ports for addressing this challenge. The Committee further recommends that for our cash strapped Major Ports, the present subsidy limit of 50% be enhanced substantially for procurement of the modern equipment for fighting any pollution due to oil spillage on a case to case basis.” [15]

The fragmented legislations and the lack of preparedness were apparent during the Chennai oil spill of 2017. Hours after the incident, Kamarajar Port Limited issued a statement that “no damage to the environment like oil pollution” and that “the situation is under control”. [16] The port authorities initially kept the Indian Coast Guard at dark and tried to cover up the extent of oil spill, super-sucker skimmers failed to function due to the dense sludge and ultimately a clean-up had to be implemented by manual scooping carried out by untrained personnel (as opposed to an emergency response team) without equipment as municipal pumps failed. [17] A month after the oil spill, the Indian Coast Guard finally pegged the figure at 150 tonnes [18]. It also emerged that Tamil Nadu had not framed a contingency plan as required under NOS-DCP and the Tamil Nadu Maritime Board had been working on a draft for 3 years prior to the date of the incident [19]. Analysts and environmentalists did not mince their words and went on to observe that “there was a deliberate attempt to underplay the accident, aimed perhaps at concealing the full extent of damage, and to cover-up the authorities’ failure in prudently assessing the situation” [20] and “this [the Chennai oil spill] is a massive screw-up”. The Central Pollution Control Board tacitly acknowledged the mismanagement and even decided to put in place a (yet another) standard operating procedure – in addition to the NOS-DCP. [21]

It is pertinent to note that there exists a severe need to implement an umbrella legislation that governs the respective aspects in relation to oil spills in the country. Numerous SOPs and multiple frameworks/guidelines are not sufficient to curb situations that arise from oil spills along the country’s coastlines but rather creates an issue in terms of its implementation on the ground. To further reiterate, the author states that rather than issuing numerous guidelines that effective systems be formulated and put in place to ensure the necessary checks and balances that are to be accordingly carried out to accordingly curb incidents of such nature. Further, in the advent of an oil spill, it is imperative that the concerned individuals responsible for the same be held accountable and be required to cover the extent of damages that have been caused.

Despite the scathing observations acknowledged in the preparedness meetings, there have been no concrete steps towards introduction of an umbrella legislation for oil spill liability and preparedness in India. Specific data around the implementation is anecdotal, and the Indian Coast Guard has not uploaded the recent minutes of the NOS-DCP preparedness meetings, public evidence with reference to recent incidents along the coasts which points to poor implementation of the NOS-DCP and the Merchant Shipping Act. A perusal of the minutes of preparedness meetings published across years point to consistent challenges posed by absence of well drafted contingency plans in place, absence of equipment at ports and failure of agencies to put in place necessary infrastructure and crisis management groups. [22] On similar lines, media reports indicate that despite NOS-DCP requiring the district collector’s office to provide personnel for shoreline clean up during oil spills, and that district officials often abdicate responsibility and pass on the buck to other departments as was evident in a recent case of an oil spill in Maharashtra. A public interest litigation has been filed in the Madras High Court in June 2021 against the state government for not constituting the requisite crisis management groups in Tamil Nadu after 6 years of NOS-DCP and the Madras High Court has gone ahead and issued notices to the respective parties. [23] The call for an overhaul is not new – analysts and experts have been harping about this ticking time bomb. Analysts have, in the past noted that “We’re well prepared on paper, but sluggish response made preparedness a joke” [24], “oil sludge is being removed manually using large buckets since the slick has travelled more than 30 km and tarred Chennai’s marina beach” [25] and “It is not enough to have a contingency plan, the Coast Guard needs to have the competence to respond to devastating emergencies such as oil spills.” [26]

On balance, while the Indian Coast Guard has been consistently trying to shore up the preparedness standards, the current framework is likely to fall woefully inadequate in a major oil spill. It is in the interest of all stakeholders that the policymakers strengthen the legislative framework by the creation of a comprehensive umbrella legislation to deal with oil spills and maritime pollution, lay down the responses backed by a statute, and specifically allocate resources to implement such contingency plan. India’s track record of holding companies accountable for causing harm to life and property and responding to similar incidents has been miserably poor. It is imperative that the policymakers acknowledge that the piecemeal framework may possibly allow entities to escape liability and prevent state agencies from responding effectively as was evident during the Chennai oil spill of 2017.

Puneet Rathsharma is currently a self-employed advocate and was previously a Senior Associate at Khaitan & Co.