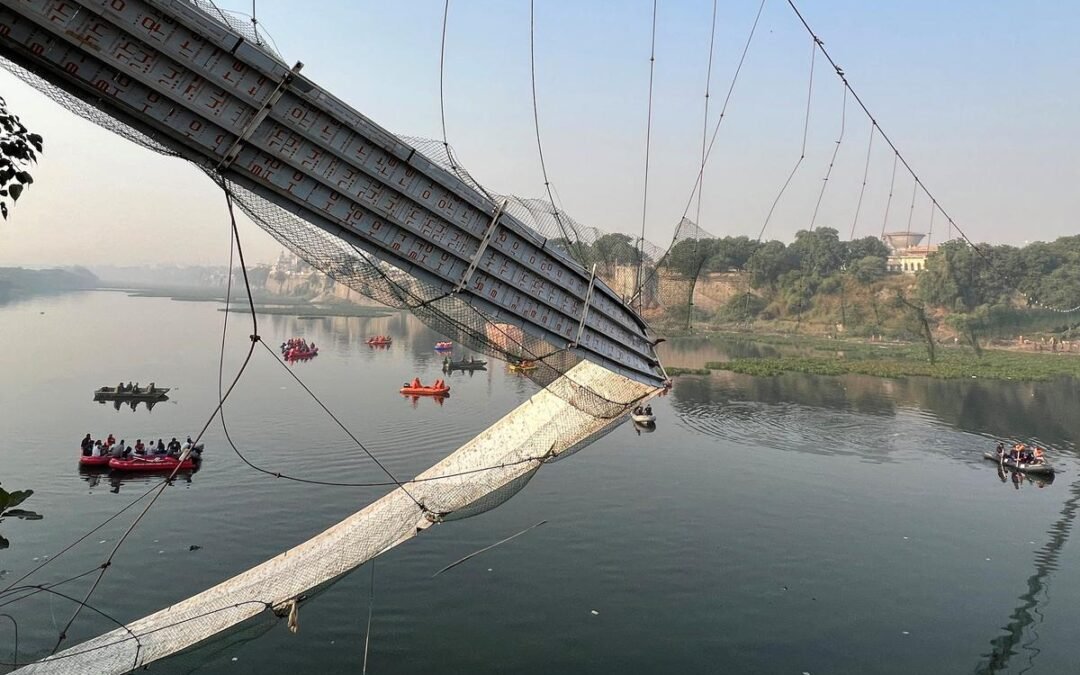 During the late evening of October 30, 2022, a 141-year-old bridge suspended with wires over the Machchu river of Gujarat broke loose and submerged under water leading to the casualty of approximately 141 people. The bridge, known asthe “jhulta pull”, was originally constructed during the period of 1858 – 1922 by Waghji Thakur, the ruler of Morbi and had re-opened, only recently, for public visits, after being renovated by Ajanta Manufacturing Pvt. Ltd./Oreva Group. Post the incident, and it was brought to notice that the contractor was working under an expired Operations and Maintenance (“O&M”) concession agreement within the alleged supervision of the Morbi Municipality.

Following the incident and after much speculation and scrutiny, several reports emerged wherein certain substantial shortcomings in the Tender process, the Contract and its management were highlighted. These lacunae were furthered by corruption and a severe absence of due procedure, thus culminating in an unfortunate incident and casualty.

On the basis of the reports as well as the facts and circumstances, the Hon’ble Gujarat High Court tooksuo moto cognizance of the matter and initiated civil and criminal proceedings against several officials of the Morbi Municipal Corporation (‘Concessionaire’) as well as against Ajanta Manufacturing Pvt. Ltd. (‘Contractor’). An acknowledgement of these proceedings was also made by the Hon’ble Supreme Court of India in the case ofVishal Tiwari v. Union of India, wherein the Bench comprising of the Hon’ble Chief Justice of India held that,

Thus, in lieu of an absence of due procedure, which led to the collapsing of a bridge, a dire need arose for a detailed examination of the procedure through which the alleged tender for the improvement and renovation of the bridge was awarded. This became necessary on account of the utter failure to comply with contractual obligations, the ultimate consequence of which was the ill-maintenance of a dilapidated ruin leading to the casualty and injury to a substantial number of people.

The first and foremost step in any basic concessionaire agreement is the Expression of Interest (EOI) or Tender, which is followed by bids from qualified bidders, who are required to submit their experience and financial quotations. Thereafter, the authority makes a selection from amongst the bidders on the basis of such experience and an ideal financial quote and signs the agreement with the awarded agency. However, in the case of the State of Gujarat,Section 110A of the Gujarat Infrastructure Development Act, 1999 (“GIDA”) allows the State Government or its agency (including any local authority operating under such agency) to enter into direct negotiations where the projects are covered within the ambitof Schedule III of the Act, where the said schedule lays down a quad-criteria for classifying an eligible project.

After completion of the aforementioned process, the agreement so signed consists of complex and detailed clauses, which seek to clearly define the rights of the Concessionaire as well as the contractor, so as to reduce friction. Amongst the different types of concession agreements, an O&M concession agreement is the one adopted for contracts where the maintenance and operation of a structure are in question. Thus, for successful execution, it is necessary for the agreement to lay down an unambiguous listing of the duties of the contractor for the purpose of adequately maintaining the structure. Thus, under the legal system, the signing of a concession agreement is the consequence of a lengthy procedure filled with substantial steps and formalities, all of which have intricate value within the system. However, after the collapse of Jhulta Pull, the fact of complete absence of most of these steps and formalities surfaced, thus giving a prima facie inference to the moment when the ball started dropping.

The various clauses which are, in actuality, present in the Indian concessionaire agreements include the following:

Majority of the above-mentioned clauses were apparently missing from the agreement between the Morbi Municipality and the Ajanta Oreva Group. The facts in the suo moto case (Suo Motu v. State of Gujarat), the Hon’ble Gujarat High Court observed that the agreement dated March 8, 2022, wherein the Concessionaire and the Contractor had been the alleged parties, was not actually approved by the Civic Body. It was further brought to the notice of the Hon’ble Court that there was also a preceding MoU between the parties, which, although drawn on 16.06.2008 for a period of 9 years, was inconsequential owing to the absence of any action by the contractor. In fact, the entire communication between the Concessionaire and the contractor, wherein the alleged maintenance of the bridge was supposed to be the subject matter, only seemed to concern the price at which the tickets were to be drawn, which further reflected the disregard to the actual objective of the O&M agreement.

It was further observed by the Hon’ble Court that post the expiration of the otiose 2008 MoU in 2017, which was merely one-and-a-half pages long and was void of any definitions of the conditions or obligations of the contractor, the latter continued to act as the contractor and continued to operate and collect revenue from the dilapidated bridge, in spite of the fact that no new agreement or formal extension of the pre-existing agreement was drawn.

Another aspect that came to light was the fact that the contractor had apprised the Concessionaire about the critical condition of the bridge and had claimed that the maintenance operations would not commence unless a new agreement was drawn, whereafter the impugned 2022 agreement was drawn. What was more peculiar was the fact that the signing of the latter 2022 agreement did not take place after following the process of floating a tender or any EOI; that is, the first step for the concession seemed to be absent.

In its observations before an open Court,the Hon’ble Bench posed the following question to the accused:

“From 15.06.2017, for a period of 2 years, without there being an MoU or agreement or entrustment, the bridge in question was continued to be maintained by Ajanta Company. After the said contract expired, what steps were taken by the official authorities to call for expression of interest or float a tender for a further period is not clear from the State’s Affidavit?”

Furthermore, the Hon’ble Court also observed that there was a complete absence of a valid “Fitness Certificate” for the allegedly renovated bridge, which in fact, should have been a mandatory clause in any concessionaire agreement pertaining to the maintenance and operation of infrastructure.

A “Fitness Certificate”, as apparent from its name, is an essential element of any standing infrastructure. This certificate seeks to classify whether the maintenance of the structure, claimed to have been restored, is completed to the satisfaction of the appropriate authority and is fit to be used as per its primary objective. In the case of the jhulta pull, while the agreement lacked any such clause, the Hon’ble Court observed that even the contractor did not take the necessary steps, in accordance with the contract, to get such certification.

Thus, the facts, as noted by the Hon’ble Court, revealed not only a blatant neglect of duty but also a complete lack of the fundamental provisions in the Concessionaire Agreement that may have prevented the tragedy.

It is needless to mention that a detailed comparison of the particulars of a general concessionaire agreement with that allegedly signed between Morbi Municipality and M/s Ajanta Manufacturing Pvt. Ltd. make it evident that the unfortunate falling of the bridge was a result of severe dysfunction in due procedure and an absence of observance of the due process of law. Even if the factum of the applicability of Section 110A of the GIDA is accepted, the entrusting of maintenance operations on the contractor, in the complete absence of any conditions, may not be considered to be entirely ethical.

It is also pertinent to mention that all such facts have been duly revealed before the Hon’ble High Court of Gujarat, where the matter remains to be sub-judice, which keeps the discussion as to the defaulter and the severity of default open and lingering.

In lieu of this, it only becomes more essential to note that the inception of the dropping ball started only after an impugned concession agreement and process came into existence, which further signifies the importance of such an agreement in Public-Private Partnerships (“PPP”) projects.